"Jupiter" from the album "The Universe" 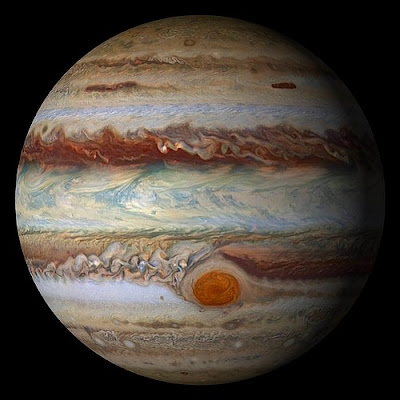 This week I wanted to talk about ‘Jupiter’ and what to look forward to with the music pieces on the upcoming album “The Universe”.

Jupiter is fifth and largest of the planets it is known as the Roman King of the gods.  Not only is it the biggest of the planets in our solar system, it has enough room to fit all the planets in our solar system and have room to spare.  The Earth can comfortably fit in well known storm as the Big Red Spot.  The vastness of the Jupiter can also fit about 1,300 Earths comfortably.  Jupiter is 485 million miles from the Sun and mostly made of gases; about 86 percent hydrogen and 13 percent helium and has no surface area.  It spins so fast that it bulges at the equator.  A day on Jupiter is less than 10 hours (9.9) and takes about 12 years to orbit the Sun.  With its enormous magnetosphere giving it a huge gravitational pull, it is a like a small solar system in itself pulling any or everything that enters its realm.

There are at least 69 Moons and all are extremely different with their substance such as ‘Io’ (pronounced eye-oh) being close most actively volcanic, Europa looks like it is cracked like an egg shell covered with ice, Callisto being filed with craters from many years of bombardment and Ganymede at -240 degrees and more than 40 miles thick on its crust Ganymede is the biggest moon in the solar system, all being very distinctive.  There are also small rings that orbit the planet, not very visible as other planets.  There are even Aurora’s around the poles.

There are storms on Jupiter and enormous pressure.  The temperatures on the mantle level are about 18,000 degrees Fahrenheit.  And the further you go toward the center it becomes a seething level of metallic hydrogen which makes up a lot of its magnetic field.  Without Jupiter the Earth and surrounding planets may cease to exist.  Because of its great magnetic field it is considered as the solar systems vacuum cleaner.  It will take comets and space debris and either sling shots it out of the way or it devours that object in its path.  July 1994 the comet Shoemaker Levy 9 came too close and impacted into Jupiter.

This piece was written for its monstrous and powerful size and vastness.  There are a number of orchestra instruments and various instruments added to give it the richness and depth. The intent was to describe an aggressive massive high energy and somewhat unpredictable power that Jupiter would portray with a majestic presence of supremacy as being the King of the planets.


Want more? "Like" Jordan Music on Facebook page and get the latest updates, comment or ask questions. There is more to come.
https://www.facebook.com/jordan.newage.music.
Posted by No Limit Sound at 8:00 PM No comments: