"Neptune" from the album "The Universe" 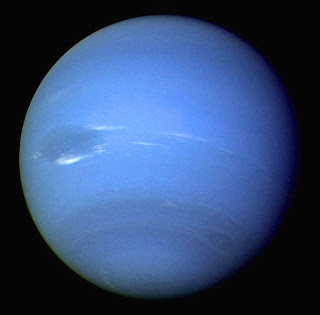 Neptune is the Roman god of the sea and the smallest and the furthest gas giant in our solar system.  It is 2.8 billion miles from the Sun.  If you ever wanted to go out for a visit it would take about 12 years to get there.  It takes about 165 Earth years to go around the Sun once.  One day is about 16 Earth hours.  It is made up of 80 percent Hydrogen and 19 percent Helium like Uranus but has a little bit of methane.  It is bluer in color due to the methane and another mysterious chemistry. Some of the winds are some of the fastest in the solar system at speeds of 1,342 miles per hour.

There are a number of storms and visible clouds that come and go.  Like Jupiter’s big red spot there is a large dark spot big enough for the Earth to go through.  This was actually a hole in the atmosphere that tends to come and go and no one knows exactly why.  The axis is 28 degrees giving it about four seasons similar to Earth and Mars, but each season is 40 years long.  In 1989 a number of the pictures were received from the Voyager 2 spacecraft it passed by and it took the spacecraft 13 years to reach Neptune from its launch.  And we haven’t been that close since to Neptune since.  Even though Neptune is the furthest out from the Sun Uranus is the coldest of the gas giants.  Neptune generates more heat internally.

Neptune has 5 faint rings named after those who discovered and researched Neptune.  Neptune has 14 known moons all named after water deity’s in Greek mythology, Triton being the biggest of the moons of Neptune and even bigger than Pluto.  Triton also contains all the masses of all of Neptune’s moons put together and even a slight atmosphere.  It also rotates in retrograde to some of its other moons.  There are geysers that shoot about 10 miles into the atmosphere and then bend about 90 degrees.   Some of the outer moons may have been captured moons.  These moons take about 25 years to orbit Neptune only one time.

When composing this piece, I wanted something calm distant and the water theme of the god of Neptune and the sea; even though it has some of the highest winds in our solar system.  It was intended to be in an oceanic scenario.  If you listen to real sound from the Voyager missions, it sounds like the sea or a wind that howls and whistles as if there was a ship out to sea coming into the harbor.  I would imagine it would go hand in hand if the sound of the planet met the music.

​UPDATE:
The album 'The Universe' DIGITAL DOWNLOAD is targeted ​to be released November 29th 2018 from this link here​ watch for it.  The physical CD copy is scheduled to be available in early December 2018.  I will keep you posted on updates or changes.