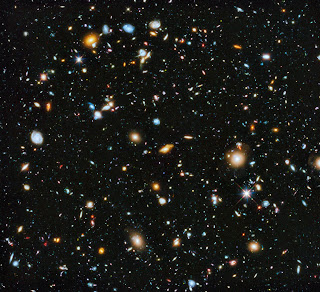 This week I wanted to talk about ‘The Universe’ and what to look forward to with the music pieces on the album “The Universe”.


How can you describe the infinite?  As much as we would like to think that we have a grip of how to finite the universe is, it is a place that has no end.  The Greek meaning of ‘universe’ from philosophers like Pythagoras being defined as ‘the all’ or ‘all things’ also known as ‘the worlds’ ‘the cosmos’.  This image is the Hubble Deep Field image taken in 1995 which displays over a 10 day period during the Christmas time period of 342 exposures of what astronomers thought was an empty spot in the sky found over 3,000 galaxies.

There are countless planets and worlds without number that are waiting to be discovered and endless possibilities of life that exist here such as physics and Dark Matter many things unknown.  As an example, the launch of the Voyager spacecraft programs launched in the 70’s they have been traveling ever since and are now well beyond our solar system and will travel at roughly a million miles per day forever.  I wanted to conclude this series of articles by saying that possibilities are endless to be discovered from our endless universe.

When composing this final chapter to this album.  I wanted to describe a vastness with a large majestic orchestra of instruments that describes the endless and continues to astonish and intrigue us as we continue to explore and take this glimpse of the infinite into what we know as the universe.

UPDATE:
The album 'The Universe' is NOW AVAILABLE for DOWNLOAD and 2 Disc CD!!    Thanks again for your patience.