"Venus" from the album "The Universe" 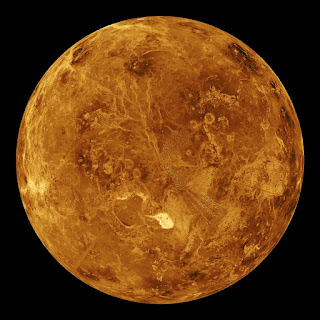 This week I wanted to talk about ‘Venus’ and what to look forward to with the music pieces on the upcoming album “The Universe”.

Venus the veiled planet is named after the Roman goddess of love and is the second closest planet to the sun.  It is 90 times denser on its surface and just a little smaller than the earth, it has been said it is our twin sister planet.  The planet rotates slowly backwards from the earth making the sun rise from the west and not the east.  Being the second closest planet from the sun you would think that it would be somewhat cooler than the planet Mercury.  On the contrary it is stays about 900 degrees Fahrenheit at all times varying only a few degrees even on the dark side where there is no sunlight.  The reason for this is due to the atmosphere.
Mercury has no atmosphere making it extreme on one side and extreme on the other.  But Venus with its constant cloud cover that only lets heat in and not out making it the hottest planet in our solar system.  Starting in 1966 the Soviet Union at the time known as the Venera missions (Russian Federation), were sending probes and landers that have landed on the surface.  With the harsh conditions the probes did not last more than a few hours due to the volcanic and sulfuric acid atmosphere.

In composing for this piece was a bit of a struggle, contemplating the direction on where to take it.  I was torn between the Roman mythology with wondrous and beauty or with the reality of the harsh destructive conditions it really is.  I hope that I was able to do a little of both.  There have been known indications that outer space not being a complete vacuum meaning having sound in space.  With the right type of instruments it makes it possible to hear these things.  With some of the Voyager missions this was made possible on picking up some of the magnetic fields that have produced sound from each of the planets and their orbiting satellites including our Sun.  There is an ingredient of sound of Venus incorporated in this music piece.  Being such a hot and yet alien world it is a wondrous place of mystery.  I hope to have conveyed some of its integrity and yet keeping its majestic qualities.

https://www.facebook.com/jordan.newage.music.
Posted by No Limit Sound at 1:00 PM