"Quasar" from the album "The Universe" 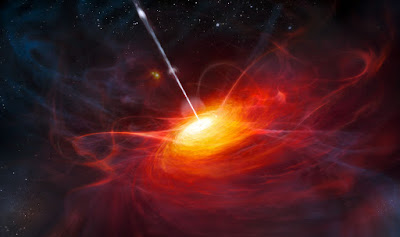 
What is a Quasar?  They are a super massive black hole.  It is a super solar system sized galaxy with high points of energy that are contained inside them.  They were discovered by radio telescopes that found what they call blobs called an occultation.  Which means it is an object that is hidden by another object and passes between the observers.  This was the brightest of the blobs that were discovered called Object Number 273 in the Brand New 3rd Cambridge Radio Catalog or 3C273 for short.  When driving gas into the galactic core.  A way this happens is when two galaxies merge and grow.

The gases descend into the gravitational well and increase in speed and swept up into a massive whirlpool around the well of the black hole which is called an Accretion Disk where the energy of motion is turned into heat.  The heat of the disks glow so bright, that we can see Quasars at great distances.  Some of the gases are swallowed causing the black hole to grow.  This energy can be pooled in the center causing the energy to shoot out from the poles of the Quasar.  Of course this can become more technical and scientific.  Which if you are interested in more there is much more on these theories.

When composing this piece, I wanted to display a sense of mass and cosmic power because of the size and complexity of this huge phenomenon.  To give it structure of moving a huge spinning mass in a cosmic and majestic way.


If you haven't already!
Take a look at my website, click around see what you find. All the links you need are here: