"Nebula" from the album "The Universe" 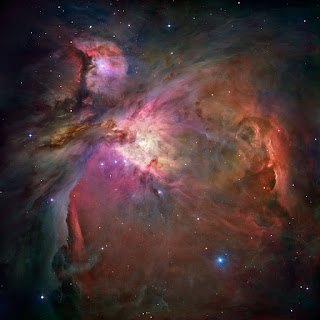 
What is a Nebula?  Is the Greek word for cloud and is an interstellar word for dust and gas.  They come in many different forms and shapes like the clouds in the sky.  Such as animals, insects, flowers and many countless other shapes and sizes.  There are four types of Nebula.  The first are stellar regions star forming clusters called nurseries.  These are huge hydrogen gas areas that gravity pulls together clumps of more material making grow hotter and hotter until it becomes a star.  Whatever is left over may become planets circling the star.  The Orion Nebula which is 15 light years across and is one of the most popular Nebulae in the sky.  It is the most active Nebula form in our galaxy.  This Nebula is in the process of making new stars.  The glow is from 4 stars called trapezium which are thousands of times brighter than our sun.


Many Nebulae are not visible to the naked eye and nearly invisible.  They can be seen with modern technology.  Although it can be seen by the from your backyard it still tends to be a blur and only a glow in Orion’s sword.  Second are called planetary nebula which not planet nebula's are caused by slow dying stars.  Some of these gas clouds can get up 36,000 degrees which is 3 times hotter than our sun.  The third kind of Nebula is called Supernova remnants.  This is a star the dies quickly with a bang and whatever is left afterwards form a Nebula for example the Crab Nebula.  The fourth nebulae are called Dark Nebulae.  The only way these Nebula's are seen are due to the bright stars behind them.

When composing this piece, I wanted to describe it as a large massive cloud.  Being such an overwhelming size of different colors and shapes this allowed me to become more fluid with its sound and environment.  The music is a bit more transparent and with a hint of a cosmic effect.  I would imagine this being a slow moving piece of music to allow this listener to feel like they are traveling through a cloud.


More things to think about.  In the meantime if you haven't listened to my other albums, feel free to share any of following links


Want more? "Like" Jordan Music on Facebook page and get the latest updates, comment or ask questions. There is more to come.
https://www.facebook.com/jordan.newage.music.
Posted by No Limit Sound at 10:57 AM